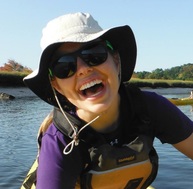 In June 2016 I graduated from Northwestern University with a bachelor’s degree in Environmental Science and Biology. I originally hail from St. Charles, Illinois, where I grew up “creek stomping” in the forest preserve behind my house. Now I am pursuing a research career in ecology and conservation. Over my four years at Northwestern, I surveyed groundwater resources in Utah, studied beaver pond restoration in Massachusetts, investigated the fatty acid content of chitin in a lab at Northwestern, and researched salmon habitat conservation in Seattle. My long-term goal is to pursue a university research position in ecology and conservation.

As a 2016-17 Luce Scholar and later an employee of the Center for Molecular Dynamics Nepal (CMDN), I spent two years living in Kathmandu, Nepal.  Experiencing environmental challenges in a place like Nepal, where recent disasters and rapid development have strongly influenced people’s relationship with the environment, provided critical context for conducting ecological research on a global scale.

In 2018, I attended Lancaster University in the United Kingdom as a Fulbright scholar to do an MSc in Biodiversity and Conservation. I studied the impacts of river restoration projects on fish populations.

Currently I am a PhD student at UC Berkeley to begin my PhD with Drs. Albert Ruhi and Justin Brashares. I study hydropower development and its impacts on freshwater ecosystems around the world. I'm also an National Science Foundation GRFP recipient!